Life in the 21st century wouldn’t be the same without rare earth metals. Cell phones, iPads, laptops, televisions, hybrid cars, wind turbines, solar cells and many more products depend on rare earth metals to function. Will there be enough for us to continue our high-tech lifestyle and transition to a renewable energy economy? Do we need to turn to deep seabed or asteroid mining to meet future demand?

“To provide most of our power through renewables would take hundreds of times the amount of rare earth metals that we are mining today,” said Thomas Graedel, Clifton R. Musser Professor of Industrial Ecology and professor of geology and geophysics at the Yale School of Forestry & Environmental Studies.

There is no firm definition of rare earth metals, but the term generally refers to metals used in small quantities. Rare earth metals include: rare earth elements—17 elements in the periodic table, the 15 lanthanides plus scandium and yttrium; six platinum group elements; and other byproduct metals that occur in copper, gold, uranium, phosphates, iron or zinc ores. While many rare earth metals are actually quite common, they are seldom found in sufficient amounts to be extracted economically. 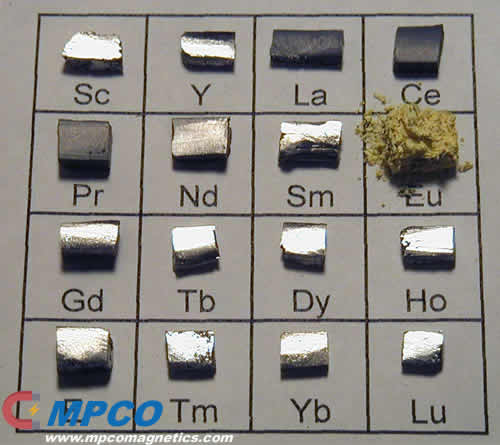 Will we have enough Rare earth metals

According to a recent Congressional Research Service report, world demand for rare earth metals is estimated to be 136,000 tons per year, and projected to rise to at least 185,000 tons annually by 2015. With continued global growth of the middle class, especially in China, India and Africa, demand will continue to grow. High-tech products and renewable energy technology cannot function without rare earth metals. Neodymium, terbium and dysprosium are essential ingredients in the magnets of wind turbines and computer hard drives; a number of rare earth metals are used in nickel-metal-hydride rechargeable batteries that power electric vehicles and many other products; yttrium is necessary for color TVs, fuel cells and fluorescent lamps; europium is a component of compact fluorescent bulbs and TV and iPhone screens; cerium and lanthanum are used in catalytic converters; platinum group metals are needed as catalysts in fuel cell technology; and other rare earth metals are essential for solar cells, cell phones, computer chips, medical imaging, jet engines, defense technology, and much more.

The principal economic sources of rare earths are the minerals bastnasite, monazite, and loparite and the lateritic ion-adsorption clays. The rare earths are a relatively abundant group of 17 elements composed of scandium, yttrium, and the lanthanides. The elements range in crustal abundance from cerium, the 25th most abundant element of the 78 common elements in the Earth’s crust at 60 parts per million, to thulium and lutetium, the least abundant rare-earth elements at about 0.5 part per million. The elemental forms of rare earths are iron gray to silvery lustrous metals that are typically soft, malleable, and ductile and usually reactive, especially at elevated temperatures or when finely divided. The rare earths’ unique properties are used in a wide variety of applications.

Wind power has grown around 7 percent a year, increasing by a factor of 10 over the last decade, noted Peter Kelemen, Arthur D. Storke Memorial Professor of Geochemistry at the Earth Institute’s Lamont-Doherty Earth Observatory. “Every megawatt of electricity needs 200 kilograms of neodymium—or 20 percent of one ton,” he said. “So if every big wind turbine produces one megawatt, five turbines will require one ton of neodymium. If wind is going to play a major part in replacing fossil fuels, we will need to increase our supply of neodymium.”

A recent MIT study projected that neodymium demand could grow by as much as 700 percent over the next 25 years; demand for dysprosium, also needed for wind turbines, could increase by 2,600 percent.

The U.S., South Africa, Canada, Australia, Brazil, India, Russia, South Africa, Malaysia, and Malawi also have deposits of rare earth metals, and while the U.S. Geological Survey expects that global reserves and as yet undiscovered deposits of rare earth metals will be able to meet future demand, new mines may take up to 10 years to develop, and resources in remote areas will likely be much more difficult to extract.

Kelemen is confident that ongoing global exploration for neodymium, for which there is no known substitute in low-weight magnets for electric motors and generators, will be successful and boost short-term supplies. On the other hand, the heavy rare earth metal dysprosium, used to increase the longevity of magnets in wind turbines and electric cars, is harder to find. “Ninety-nine percent of the current supply comes from clay deposits that can be easily mined with a shovel in Jiangxi, China,” Kelemen said. “Other known deposits of dysprosium in Canada and Greenland will be much harder to mine.”

To ease the bottleneck of rare earth metals, mines being developed in Australia, Brazil, Canada and Vietnam could be in production within five years. The Molycorp mine in Mountain Pass has reopened and expects to be operating at full capacity this year.

After a five year career as an Earth Science/Biology Teacher in the Connecticut public school system Bill started his storied business Rare Earth Mining Co. by selling picture jasper way back in the 70’s. While specializing in the jaspers he realized soon after that there was a world of gem materials which interested him.

After traveling to the famed twin cities of Idar-Oberstein in Germany he made connections with cutters and companies who mentored his success throughout the 80’s. Bill became a charter member of the American Gem Trade Association helping to found the organization.

More mining of rare earth metals, however, will mean more environmental degradation and human health hazards. All rare earth metals contain radioactive elements such as uranium and thorium, which can contaminate air, water, soil and groundwater. Metals such as arsenic, barium, copper, aluminum, lead and beryllium may be released during mining into the air or water, and can be toxic to human health. Moreover, the refinement process for rare earth metals uses toxic acids and results in polluted wastewater that must be properly disposed of. The Chinese Society of Rare Earths estimated that the refinement of one ton of rare earth metals results in 75 cubic meters of acidic wastewater and one ton of radioactive residue. The 1998 leak of hundreds of thousands of gallons of radioactive wastewater into a nearby lake was a contributing factor to Molycorp’s shutdown in 2002. Many new mines, including Molycorp, are now developing more environmentally friendly mining techniques.

Nevertheless, we are mining poorer and poorer ores all the time, and it takes more and more energy to extract the same amount of metal, according to Graedel. “I’m not worried that we’ll run out of rare earth metals, but will we have enough energy at a reasonable price to extract it?” he asked.

The high performance of our products depends on the specific rare earth metals they utilize; unless there are technological breakthroughs, doing without those materials would force products to revert to old performance standards. “I’m worried that things will become so scarce and expensive that we can’t routinely use them as part of modern industrial design,” said Graedel. There could come a point when the cost of extracting rare earth metals is simply not economically justifiable, no matter how high their prices rise.

Because of rising prices, there is now renewed interest in seabed mining for rare earth metals. Since the 1960s, scientists have known about the existence of manganese nodules, rocks abundant in water 4,000 to 5,000 meters deep that contain nickel, copper, cobalt, manganese and rare earth metals, but in the past, mining them never made economic sense. In 2011, a Japanese team found huge deposits of rare earth metals, including terbium and dysprosium, in sea mud 3,500 to 6,000 meters deep in the Pacific Ocean. One square kilometer (0.4 square mile) of deposits will be able to provide one-fifth of the current global annual consumption, according to Yasuhiro Kato, an associate professor of earth science at the University of Tokyo.

The New York Times recently reported the discovery of deposits of gold, silver, copper, cobalt, lead and zinc in the sulfurous mounds that gush hot water from fissures near active volcanic areas on the ocean floor. Seabed mining, however, could cause great damage to fisheries and marine ecosystems, so environmentalists are pushing for more research and mitigation planning before it begins.

As global warming accelerates the melting of the Arctic ice cap, rare earth metal deposits are becoming accessible and a number of countries are positioning themselves to exploit them.

Then there is the sci-fi-sounding mission of Planetary Resources, a company backed by filmmaker James Cameron and investors Larry Page and Eric Schmidt from Google. It aims to mine the “easily accessible” 1,500 asteroids orbiting Earth, which contain metals such as iron, nickel, cobalt and the platinum group metals used in microprocessors, catalytic converters and renewable energy systems. The company contends that platinum group metals can be found in much higher concentrations on some asteroids than in Earth’s richest mines.

Kelemen believes it will take more than a decade, at least, before there is commercially significant extraction of rare earth metals from seabed manganese nodules or asteroid mining, and that sulfurous mound mining would not alleviate the neodymium shortage. So what other solutions exist?

“I would like to see more exploration and research to make sure we know what’s there and what the challenges are of going after it,” said Graedel. “I don’t think we know if we’ll have the resources to meet future demand.” He also wants material scientists to aim their product design and lab investigations at the most common elements, rather than the scarcer ones. Some companies, including GE, Toyota and Ford, are trying to use less rare earth metals in their products, limit waste and/or develop substitute metals.

Though recycling e-waste cannot satisfy the rapidly growing demand for rare earth metals, it is one way to help alleviate the shortage. Recycling and reusing materials also saves the energy used in mining and processing, conserves resources, and reduces pollution and greenhouse gas emissions. The U.S. Environmental Protection Agency reports that in 2009, 2.37 million tons of electronics were discarded, but only 25 percent was recycled. The European Union recently enacted new e-waste recycling rules requiring member states to recycle 45 percent of all electronic equipment sold starting in 2016, rising to 65 percent by 2019. (Find out where you can recycle your e-waste.)

Ironically, as prices for electronic products come down, people tend to buy more and more of them, so demand for rare earth metals keeps rising.

“In the 21st century, we are facing a lot of resource issues—energy, water, food and metals,” said Graedel. “Ultimately each individual consumer is driving the whole rate of expansion of resource use…do we really need all this stuff?”