The grades of neodymium magnets indicate their magnetic strength. The higher the grade number, the stronger is the magnet’s power. The numbers come from their properties expressed as mega gauss Oersteds or MGOe, which is the strongest point of its BH Curve.

The “N” grading scale begins at N30 and goes to N52, though N52 magnets are seldom used or only used in special cases. The “N” number may be followed by two letters, such as SH, which indicate the magnet’s coercivity (Hc). The higher the Hc, the higher the temperature the neo magnet can endure before it loses its output.

The chart below lists the most common grades of neodymium magnets presently being used.

The approximate maximum working temperature of each grade is indicated below. The XX is the maximum energy product in MGOe. 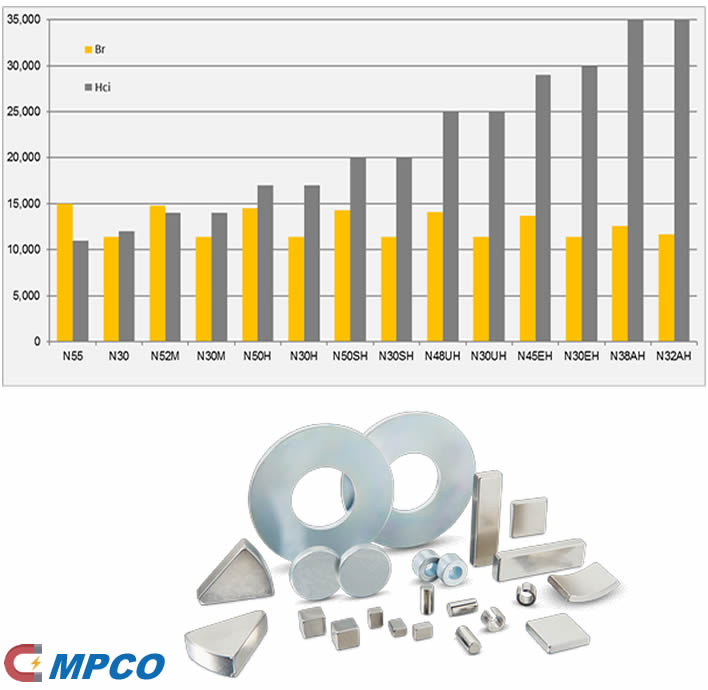 The Properties of Neodymium Magnet

The Properties of Neodymium Magnets

Remanence:
When neodymium is placed in a magnetic field, the atomic dipoles align. After being removed from the field, a portion of the alignment remains creating magnetized neodymium. Remanence is the flux density that remains when the external field returns from a value of saturation to zero, which is the residual magnetization. The higher the remanence, the higher the flux density. Neodymium magnets have a flux density of 1.0 to 1.4 T.

Permanent magnets have a B field in their core and surroundings. The direction of the B field’s strength is attributed to the points inside and outside the magnet. A compass needle in a B field of a magnet points itself toward the field direction.

There is no simple way to calculate flux density of magnetic shapes. There are computer programs that can make the calculation. Simple formulas can be used for less complex geometries.

The intensity of a magnetic field is measured in Gauss or Teslas and is the common measurement of a magnet’s strength, which is a measure of the density of its magnetic field. A gauss meter is used to measure a magnet’s flux density. The flux density for a neodymium magnet is 6000 Gauss or less because it has a straight line demagnetization curve.

Regardless of how strong neodymium magnets may be, extreme temperatures can alter their atoms. Prolonged exposure to high temperatures can cause them to completely lose their magnetic properties, which begins at 80o C or 176o F.