1) zinc: the surface looks silver white, can do 12-48 hours of salt fog, can be used in some glue bonding, (such as AB glue) such as sintered ndfeb strong magnetic electroplating good can be stored for two to five years, its advantage is the price is relatively low.

2) nickel: it looks like stainless steel color, which is difficult to be oxidized when left in the air. Besides, it has a nice appearance and good gloss. The plating can pass 12-72 hours of salt spray test. The disadvantage is that it can not be used with some glue for bonding, which will cause the coating to fall off. Accelerate the oxidation, now the market for nickel – copper – nickel electroplating method to do 120-200 hours of salt spray, but its electroplating costs are relatively higher.

4) chrome: chrome plating industry is also relatively rare, its plating cost is very high, the general company can not accept. But its ability to release decay is very strong, it is difficult to react with other substances. It is mainly used in places with strong ph, and the price of domestic products is relatively low, so there are few people to choose from. 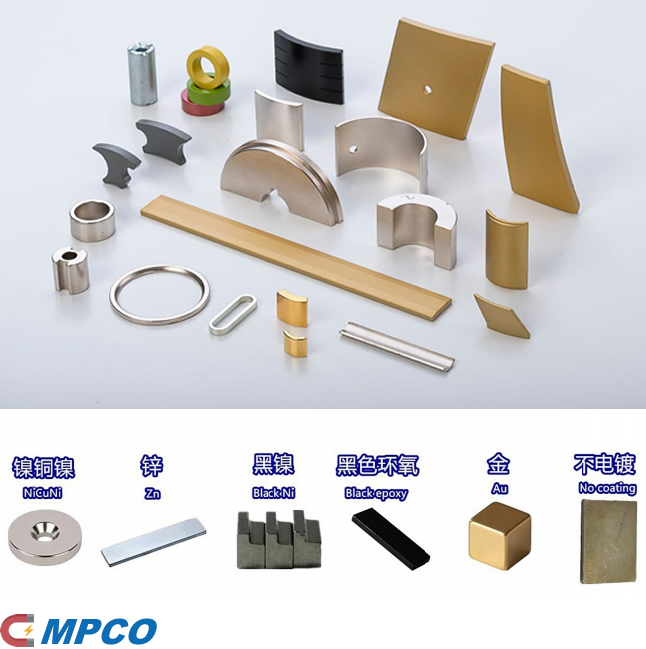 5) black zinc: according to the requirements of the customer, the surface of the product is treated into black. In terms of the electroplating process, a layer of black protective film is added on the basis of galvanization through chemical treatment. This film can also protect the product, increase the salt spray time and extend the oxidation time. But its surface is easy to scratch, lose its protective effect. Now the use of people with few, most of the resin instead. Here’s the explanation.

6) gold: this industry is now very popular, we see some of the yellow gold stalls on the street jewelry is mostly gold, or copper. Gold plating makes the appearance of the products look like gold is very beautiful, generally used in the jewelry industry, our products can also be gold plating, for magnetic jewelry.

7) epoxy resin: the effects of NI,ZN, epoxy resin and PARYLENE-C coating on the magnetic properties of ndfeb magnets in three solutions were studied.Polymer material > epoxy resin >NI coating >ZN coatingIs in the product after nickel plating on the outside to add a layer of resin paint, this industry has been two years before the market, its development rate is very fast, now a variety of electroplating products with a lot of people, its biggest advantage is that you can achieve the color you want.Therefore, different colors are selected for the coating of sintered ndfeb magnets according to different needs.