The use of NdFeB magnets has been very common all the time. With the change of time, the technology era is advancing constantly, and the use of NdFeB magnets is becoming more and more obvious. MPCO NdFeB magnets not only have small size, light weight and strong magnetic properties, but also the most reasonable and best magnets in this society. The most important raw materials for NdFeB magnets are metal bismuth, pure iron, iron-boron alloy and other additives, so NdFeB magnets will have such good performance. Although magnets give us a lot of convenience, but also have some damage, such as keyboards, bank cards and other magnetic electronic goods will be magnetized by magnets.

NdFeB magnets are used in descaling and anti-scaling occupations. After the water is treated by high-strength magnetization of NdFeB, the water molecules are simultaneously deformed by firing angle and length, and the hydrogen bond angle is reduced from 105 degrees to 103 degrees. Physical and chemical properties occur in the series of changes in fire, water activity and ablation progress greatly, the calcium carbonate in the water in the cooking process to form a relatively solid calcium bicarbonate, not easy to accumulate on the wall, it is easily taken away by the water. The degree of polymerization of other water is increased, and the ablated solid material is made into finer particles. After the particles are refined, the interval between the two ions is small, and it is difficult to aggregate on the wall, and then the descaling effect is reached. 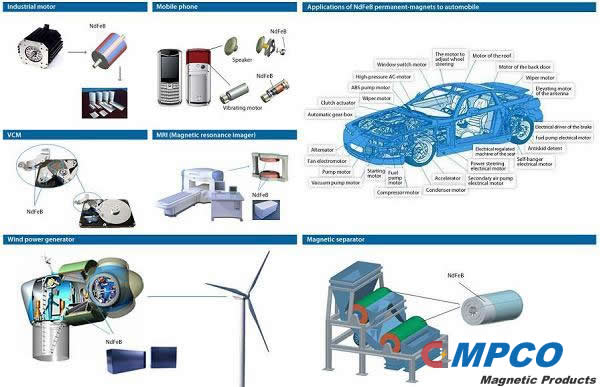 NdFeB magnet manufacturers follow the automotive industry’s skill and human needs for energy conservation and environmental protection. Electric or hybrid electric vehicles with low energy consumption, low music and low exhaust gas have become the goal everyone seeks. The bonded NdFeB magnet has the advantages of high magnetic function, small volume and high efficiency. The motor efficiency of the NdFeB magnet is 8-50% higher than that of the popular motor, the power consumption is reduced by more than 10%, and the volume and component can be increased by 30%. the above. The vehicle has been developed to be miniaturized, lightweight, highly functional, and energy-saving and environmentally friendly.

As a third-generation rare earth permanent magnet material, NdFeB magnets have a very high function and are very common in application. However, it is necessary to pay attention to the protection of the surface of NdFeB magnets in order to prevent the damage of corrosion. , zinc, etc. stop plating, and surface spray epoxy resin.

What is the success point of NdFeB magnets? We must know that in today’s society, after thousands of years of development, today’s magnets have become an indispensable useful material in our days. Through advanced powder metallurgy processes, alloys with different materials can achieve and exceed the effects of magnets, and can also maximize the magnetic force.

In the 18th century, man-made magnets were presented, but the process of making higher magnetic data was very slow. It was not until the 1920s that AlNiCo was produced. (After that, Ferrite was produced in 1948 (Ferrite (, In the 1970s, rare earth magnets [Rare Earth magnet] samarium cobalt (SmCo (SbCo 1986 (NdFeB (born, this is by far the strongest magnet in the world).

At this point, the physical magnetic science and technology has been further developed, and the strong magnetic data has also made the components more compact. In 1999, the Zibo Shengjin magnet broke through the professional precedent with the self-supporting 13000 GS rare earth magnet, and soon launched in the industry. The rare earth magnetic profession ushered in a new world.

The temperature of the powerful magnet is below 80 degrees. We only need to put the powerful magnet on the fire for a few minutes. After cooling, you put it around the iron block and found that he has lost the magnetism and can no longer absorb it. Strong NdFeB Magnets Application

Powerful Magnets Help us in Our Daily Life