TMR sensor is an epoch-making magnetoresistance effect sensor which has been applied to industrial application in recent years. TMR sensor has a much higher resistance change rate compared to AMR and GMR sensor, thus obtained many merits include low cost and power consumption, high response frequency and sensitivity. SDM has also collected some experience in TMR sensor magnet because of the widely use of TMR sensor. 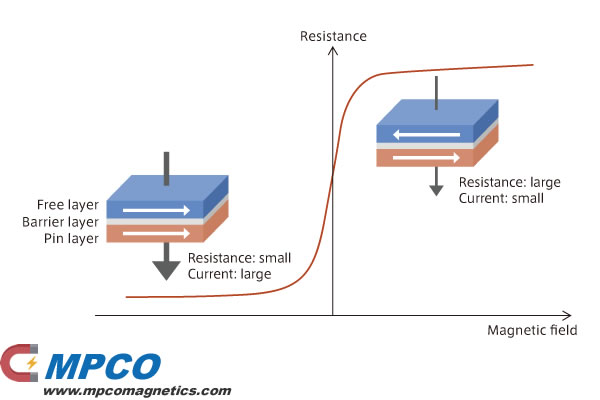 Left: when the magnetization directions of the free layer and pin layer are parallel, the resistance becomes small and a large current flows.

Right: when the magnetization directions of the free layer and pin layer are antiparallel, the resistance becomes large and only a weak current flows.

What is Tunneling Magnetoresistance Effect?

The sandwich structure made by two ferromagnetic layers and insulating layer can be called magnetic tunnel junctions (MTJs). Tunneling magnetoresistance of MTJs will be changed when changing the relative orientation of two ferromagnetic layer’s magnetic moment, and this phenomenon is known as tunneling magetoresistance (TMR) effect. The structure of TMR and GMR component is basically the same, and current direction of TMR and GMR component is perpendicular and parallel to the layer respectively. TMR Sensor Magnets

The magnetization direction of the pin layer is fixed, while the magnetization direction of the free layer follows the external magnetic field direction.
Since the resistance value of the element is proportional to the relative angle between the magnetization directions of the pin layer and free layer, it can perform 360° angle detection as an angle sensor.
The output of TMR sensors is 500 times higher than that of a hall element, and also has low power consumption (5mW/under recommended conditions), which makes them ideal as sensors for automotive applications. For example, they can replace conventional angle sensors using hall elements, as automotive steering angle sensors or EPS (electric power steering) motor angle sensors.
A low temperature drift (changes in output caused by ambient temperature changes) is a basic requirement for sensors. is a graph comparing the temperature dependence of the angle errors of TMR sensor and a conventional AMR sensor. In the conventional AMR sensor, the angle error becomes extremely large on the low or high temperature side. By contrast, TMR sensor maintains a stable angle accuracy in a broad temperature range (angle error of ±0.6° or smaller in the magnetic field range of 20 to 80mT and the temperature range of -40 to 150°C). In addition, low aging deterioration is another notable feature of TDK TMR sensors. Due to this feature, they are expected to be utilized not only in automotive electronic equipment but in various types of industrial equipment.

Sensing technologies are greatly contributing to the improvement of the fuel efficiency of automobiles. In an automotive engine, crank angle sensors or cam angle sensors are used to obtain information for calculating the optimal timing and amount of fuel injection in the engine ECU (electronic control unit).
Although there are various types of crank angle or cam angle sensors, non-contact type magnetic sensors have become the mainstream because of their insusceptibility to wear or dust. A toothed gear pulsar (pulsar rotor) made of a magnetic material is attached to a crankshaft or cam shaft, and a magnetic sensor to which a magnetic field applied by a bias magnet is contactlessly placed to face it. When the engine starts and the gear pulsar rotates, the density of the magnetic flux from the magnet changes alternately due to the projections and recesses of the gear teeth. The magnetic sensor extracts this as a pulse signal, and detects the rotation speed based on the number of pulses per unit time. Because of this mechanism, these sensors are also called gear tooth sensors.
Compared to sensors using a hall element, TMR sensors feature extremely high sensitivity and high output, and realize superior sensing capability as wheel velocity sensors for ABS (anti-lock braking) systems. Moreover, they can also be expected to be utilized as current sensors that conserve energy by controlling charging and discharging of batteries. TMR Sensor Magnets 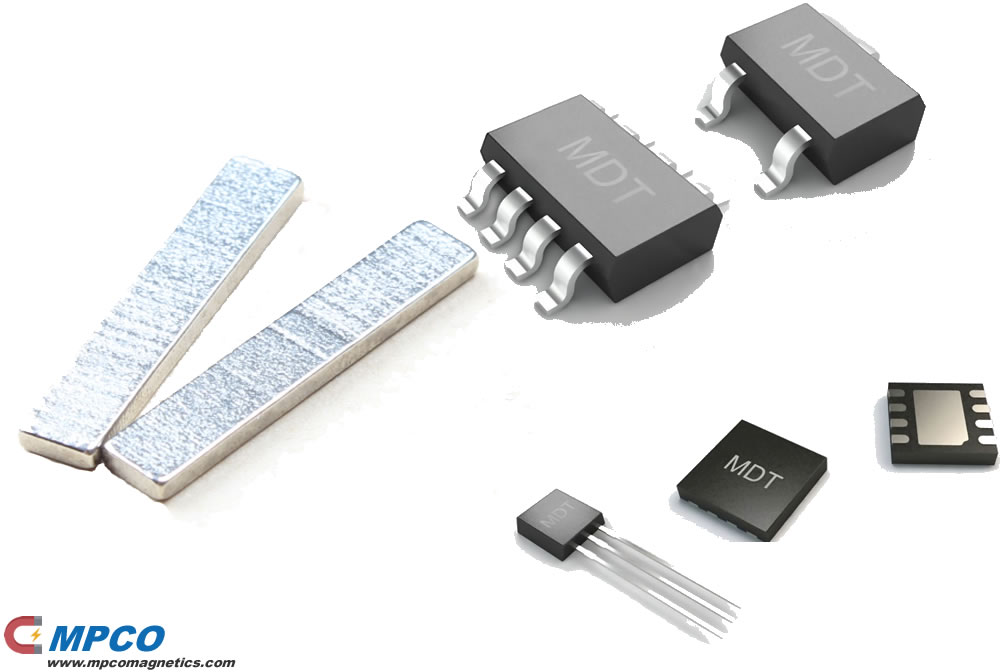 MPCO MAGNETICS team will help customers to choose suitable TMR sensor according to the detailed technical specifications, and looking forward to cooperating with relevant customers.