Most rare earth elements (RE) form RE 2Fe14B compounds, which are the basic phases of sintered rare earth iron-boron series permanent magnet materials, accounting for 96% -98% of sintered rare earth iron-boron series permanent magnets. All RE2Fe14B compounds have the same crystal structure, but their magnetic properties are very different. That is to say, adding other rare earth elements to sintered neodymium iron boron instead of neodymium can change some properties of the magnet.Elements in Sintered NdFeB

The role of heavy rare earth metal Dy instead of Nd

Significantly improve the coercive force of the magnet

Theoretically, for every 1% (atomic fraction) of Dy instead of Nd, the magnetic polarization Js of the magnet decreases by 90mT.

It should be noted that the addition of heavy rare earth element Dy will significantly increase the raw material cost of sintered NdFeB permanent magnets, so the relationship between cost and magnet performance needs to be comprehensively considered.Elements in Sintered NdFeB

The role of heavy rare earth metal Tb instead of Nd

Adding Tb to replace Nd in sintered neodymium iron boron magnets has the same effect as the replacement of Nd by Dy, but the anisotropic field HA of Tb 2Fe14B is higher, so the coercivity of the permanent magnet can be more effectively improved. However, Tb has less reserves in Dare than Dy and has a higher price.

The role of metal Gd and metal Ho in replacing Nd

Gd has the highest reserves in heavy rare earth metals, and Gd can also form Gd2Fe14B compounds. The magnetic polarization strength Js and the anisotropic field HA of the compounds are significantly lower, but the Curie temperature Tc is the highest. Due to the high reserves and low price of Gd, some manufacturers add Gd in the form of samarium-iron alloy to partially replace Nd to produce low-cost sintered Nd-Fe-B. However, its practical use of Gd instead of Nd is a waste. Once Gd is found to have more important uses in the future, it will be found to be an irreparable loss. Using Ho instead of Nd has the same effect and problem.Elements in Sintered NdFeB 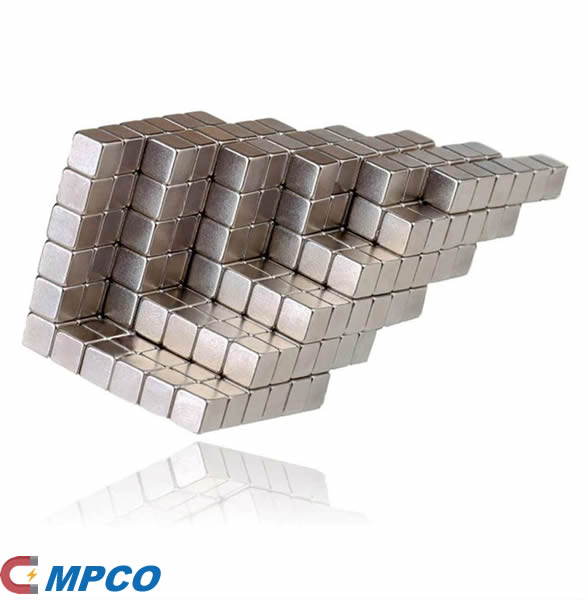 Light rare earth elements have abundant reserves and are relatively inexpensive. The development of light rare earth metals for the manufacture of sintered neodymium iron boron materials is worth encouraging.

La, Fe, B metals are relatively difficult to form La2Fe14B, the temperature is very narrow, but once formed below 860 ° C is stable. Nd accounts for 65% -75% of the cost of sintered neodymium iron boron. At this stage, the cost of La is about one-tenth that of Nd. Using La to replace Nd can reduce costs and promote the comprehensive utilization of rare earth resources. With the increase of La content, the magnetic polarization Js, the remanence Br, the coercive force Hcj, and the maximum magnetic energy product (BH) m will decrease. La is a non-magnetic atom. Due to magnetic dilution, the (BH) m decreases. Decrease much faster than Br.

Ce2Fe14B has poor stability and is more difficult to form. As the Ce content increases, various magnetic properties decrease. At the same time, the addition of Ce will reduce the Curie temperature and temperature stability of the magnet.

The Pr2Fe14B compound has several basic conditions that can be used as a permanent magnet material, and good magnetic properties can be obtained by sintering at about 1060 ° C. Using (PrNd) -Fe metal as raw material can produce sintered NdFeB permanent magnets with good magnetic properties. It should be noted that Pr is easier to oxidize than Nd, and some materials that require high stability should appropriately control the amount of Pr.

The role of other metals in replacing Fe

Effect of partial replacement of Fe by cobalt on sintered NdFeB

Scholars’ research results show that adding a small amount of aluminum Al can significantly improve the coercivity of the ternary Nd-Fe-B material. The research results indicate that on the basis of Nd-Fe-Co-B permanent magnet materials, the addition of Al can compensate for the reduction of the coercive force caused by the addition of Co. Therefore, Nd-Fe-Co-Al- B alloy.

The study found that adding a small amount of copper Cu to the (Nd, Dy) -Fe-B and (Nd, Dy)-(Fe, Co) -B systems can significantly increase its coercive force, while Br hardly decreases. , Which can produce high Hcj and high (BH) m permanent magnets.

Adding a small amount of niobium Nb or zirconium Zr to replace some iron on the basis of ternary Nd-Fe-B alloy can effectively improve the Hcj and squareness Hk of the alloy, but the Br is reduced very little, and the magnetic flux of the alloy cannot be reduced. loss. The experimental results show that the highest niobium Nb content in the Nd-Fe-B alloy is 3% (atomic fraction). Adding excessive Nb will cause the coercivity of the alloy to decrease rapidly and make Nd2Fe14B unstable.

The addition of gallium and Ga can significantly increase the coercivity of the alloy and reduce the irreversible magnetic field hirr. In Nd-Fe-Co-B alloys, as the content of Co increases, the alloy’s Hcj decreases, but in the case of adding Ga Next, the phenomenon of increased coercive force appeared. It is expected that Nd-Fe-B permanent magnet materials with high Curie point and high Hcj may be prepared in Ga-added alloys