Because magnetic fields are transparent to the human eye, measuring their strength requires specialized tools that measure the working air gap of the magnetic circuit. Currently there are two accepted ways of testing your magnetic separation equipment and this subject itself is not without controversy. The first is with the use of an instrument called a Gauss Meter or Magnetometer and a probe, and the second is with a Pull Test Kit using a scale and a selection of different sizes of ferrous test pieces; a ¼” ball, a ½” ball, a 1” ball and a 1” x 3” plate. 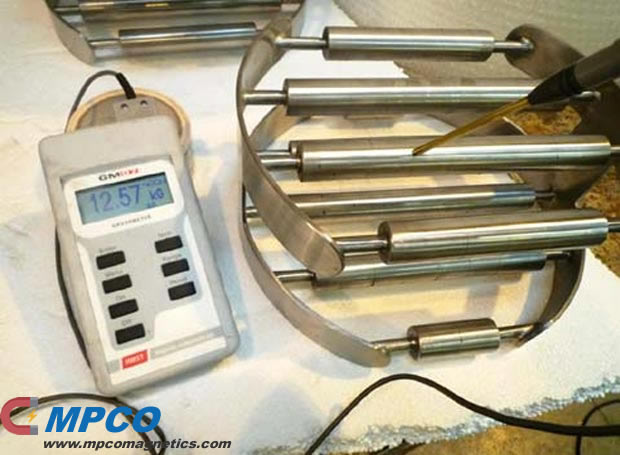 A Gauss Meter is an electronic device that measures the flux density at any given point on your magnet. As the probe is pressed against the surface of the magnet it senses the flux density and translates it into an electrical voltage read by the gauss meter. Gauss readings are displayed on the meter. When the maximum number is found while moving across the face of the magnet (usually at a pole piece), it is recorded.

It is a scientific piece of equipment that can be calibrated. In clinical environments where the working air gap can be plotted and the probe placed repeatedly in the exact same spot within the gap, gauss is incredibly accurate.

In real world environments Gauss testing has serious limitations. Gauss profiles change significantly depending upon the location and angle at which the probe is placed within the working air gap in relation to the line of flux travel. Because magnet circuits vary from one magnet to the next, and because of “human error,” accurate readings are difficult to attain making the manually taken gauss value an imprecise determination of the magnets strength. Simply placing a different amount of pressure on the probe to the surface of the magnet will create drastically varying results. Because the length of time that lapses between testing, it is not uncommon for different individuals to execute them, which further limits accuracy. Lastly, any mechanical damage to the probe or cable will degrade the precision of the instrument. They are essentially “consumables” that require regular replacement. These factors add time, cost, and technical training to the equation.TESTING MAGNET

A Pull Test Kit utilizes a compact digital scale or a spring scale, and a series of ferrous test fixtures (a ¼”, ½”, and 1” ferrous ball and 1” x 3” ferrous plate). The magnetic pull strength is measured by using the calibrated scale and a ferrous test piece to determine the breakaway force, typically measured in pounds or ounces. The test fixture has one end attached to the scale and the other end securely attached to the working area of the magnet at a pre-determined position (on the surface with a specified air gap). It is then slowly pulled away at a perpendicular direction to the magnet until it is released. The pull strength is registered on the scale.TESTING MAGNET

The digital scale offered in Pull Test Kit is also a scientific device that can be calibrated and NIST (National Institute of Standards and Technology) certified. In practical applications the pull test approach is advantageous because the testing equipment is less expensive to acquire, more efficient to operate, and achieves more consistent repeatable values than the gauss approach regardless of the individual operator. The ferrous test fixture is drawn to the magnets peak energy point with every repetition of the test, as opposed to the gauss approach which requires the operator to find the peak energy point within the working air gap using the probe. The pull test is also performed much more efficiently than the gauss method, minimizing production downtime.TESTING MAGNET

Just as Gauss meters have evolved over the years, so have mechanical pull test kits. Akin to a fish scale, some company’s pull test kits are still offered with simple spring loaded gauges that measure the force required to pull a small metal sphere or ball.