A superconducting magnet is an electromagnet made from coils of superconducting wire. They must be cooled to cryogenic temperatures during operation. In its superconducting state the wire has no electrical resistance and therefore can conduct much larger electric currents than ordinary wire, creating intense magnetic fields. Superconducting magnets can produce greater magnetic fields than all but the strongest non-superconducting electromagnets and can be cheaper to operate because no energy is dissipated as heat in the windings. They are used in MRI machines in hospitals, and in scientific equipment such as NMR spectrometers, mass spectrometers, fusion reactors and particle accelerators. They are also used for levitation, guidance and propulsion in a magnetic levitation (maglev) railway system being constructed in Japan. 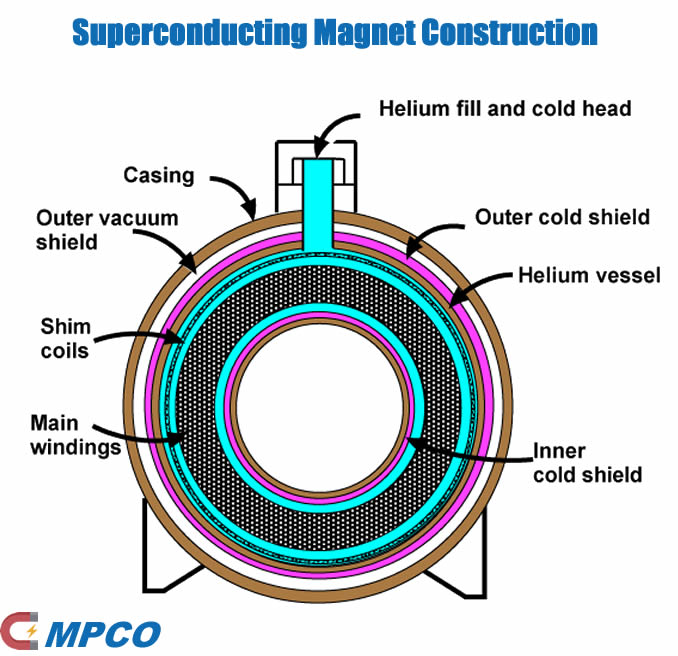 Liquid cooled
Liquid helium is used as a coolant for many superconductive windings. It has a boiling point of 4.2 K, far below the critical temperature of most winding materials. The magnet and coolant are contained in a thermally insulated container (dewar) called a cryostat. To keep the helium from boiling away, the cryostat is usually constructed with an outer jacket containing (significantly cheaper) liquid nitrogen at 77 K. Alternatively, a thermal shield made of conductive material and maintained in 40 K-60 K temperature range, cooled by conductive connections to the cryocooler cold head, is placed around the helium-filled vessel to keep the heat input to the latter at acceptable level. One of the goals of the search for high temperature superconductors is to build magnets that can be cooled by liquid nitrogen alone. At temperatures above about 20 K cooling can be achieved without boiling off cryogenic liquids.

Mechanical cooling
Because of increasing cost and the dwindling availability of liquid helium, many superconducting systems are cooled using two stage mechanical refrigeration. In general two types of mechanical cryocoolers are employed which have sufficient cooling power to maintain magnets below their critical temperature. The Gifford-McMahon Cryocooler has been commercially available since the 1960s and has found widespread application. The G-M regenerator cycle in a cryocooler operates using a piston type displacer and heat exchanger. Alternatively, 1999 marked the first commercial application using a pulse tube cryocooler. This design of cryocooler has become increasingly common due to low vibration and long service interval as pulse tube designs utilize an acoustic process in lieu of mechanical displacement. Typical to two stage refrigerators the first stage will offer higher cooling capacity but at higher temperature ≈77 K with the second stage being at ≈4.2 K and <2.0 watts cooling power. In use, the first stage is used primarily for ancillary cooling of the cryostat with the second stage used primarily for cooling the magnet.

The superconducting portions of most current magnets are composed of niobium-titanium. This material has critical temperature of 10 kelvins and can superconduct at up to about 15 teslas. More expensive magnets can be made of niobium-tin (Nb3Sn). These have a Tc of 18 K. When operating at 4.2 K they are able to withstand a much higher magnetic field intensity, up to 25 to 30 teslas. Unfortunately, it is far more difficult to make the required filaments from this material. This is why sometimes a combination of Nb3Sn for the high-field sections and NbTi for the lower-field sections is used. Vanadium-gallium is another material used for the high-field inserts.

High-temperature superconductors (e.g. BSCCO or YBCO) may be used for high-field inserts when required magnetic fields are higher than Nb3Sn can manage.[citation needed] BSCCO, YBCO or magnesium diboride may also be used for current leads, conducting high currents from room temperature into the cold magnet without an accompanying large heat leak from resistive leads.

Conductor structure
The coil windings of a superconducting magnet are made of wires or tapes of Type II superconductors (e.g.niobium-titanium or niobium-tin). The wire or tape itself may be made of tiny filaments (about 20 micrometers thick) of superconductor in a copper matrix. The copper is needed to add mechanical stability, and to provide a low resistance path for the large currents in case the temperature rises above Tc or the current rises above Ic and superconductivity is lost. These filaments need to be this small because in this type of superconductor the current only flows in a surface layer whose thickness is limited to the london penetration depth. (See Skin effect) The coil must be carefully designed to withstand (or counteract) magnetic pressure and Lorentz forces that could otherwise cause wire fracture or crushing of insulation between adjacent turns.