The North Magnetic Pole is the wandering point on the surface of Earth’s Northern Hemisphere at which the planet’s magnetic field points vertically downwards (in other words, if a magnetic compass needle is allowed to rotate about a horizontal axis, it will point straight down). There is only one location where this occurs, near (but distinct from) the Geographic North Pole and the Geomagnetic North Pole. 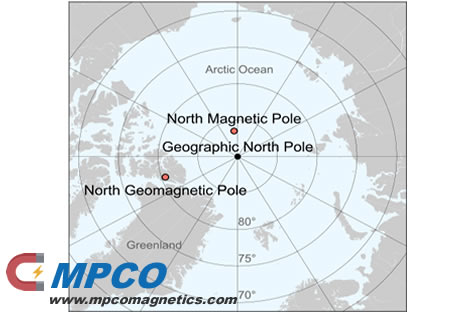 Its southern hemisphere counterpart is the South Magnetic Pole. Since the Earth’s magnetic field is not exactly symmetrical, the North and South Magnetic Poles are not antipodal, meaning that a straight line drawn from one to the other does not pass through the geometric centre of the Earth.

The Earth’s North and South Magnetic Poles are also known as Magnetic Dip Poles, with reference to the vertical “dip” of the magnetic field lines at those points.

The direction of magnetic field lines is defined such that the lines emerge from the magnet’s north pole and enter into the magnet’s south pole.

Part of the Carta Marina of 1539 by Olaus Magnus, depicting the location of magnetic north vaguely conceived as “Insula Magnetu[m]” (Latin for “Island of Magnets”) off modern day Murmansk. The man holding the rune staffs is the Norse hero Starkad.

Early European navigators believed that compass needles were attracted to a “magnetic island” somewhere in the far north (see Rupes Nigra), or to the Pole Star. The idea that the Earth itself acts as a giant magnet was first proposed in 1600 by the English physician and natural philosopher William Gilbert. He was also the first to define the North Magnetic Pole as the point where the Earth’s magnetic field points vertically downwards. This is the definition used nowadays, though it would be a few hundred years before the nature of the Earth’s magnetic field was understood properly.