The ancient Atharva Veda has the reference of some magnet like materials in the treatment of various diseases.

Magnet is said to have very ancient origin and its properties were known to the very ancient Aryans. They have the belief that the magnet, besides having the power of attracting iron, was also gifted with many mystical and curative powers. The Vedas which are the most ancient religious scriptures of the Hindus, also mentioned about the treatment of some diseases with special sand and stones at several places in India. 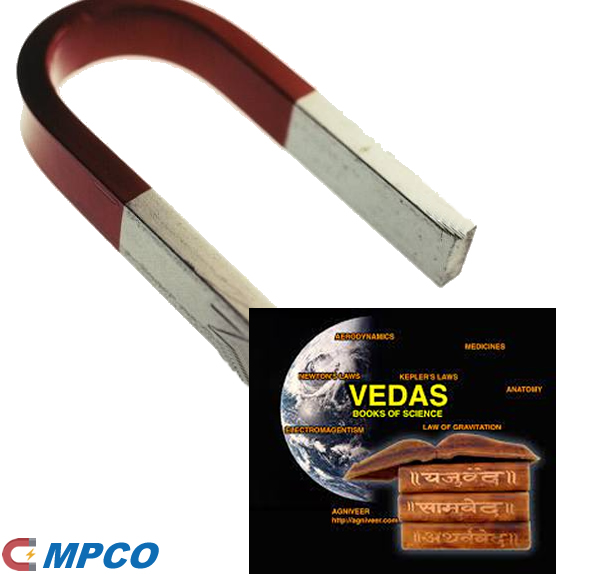 Again, mantras 2 and 3 of Sukta 35 of Kand 7 of Part 3 of the Atharva Veda deal with the treatment of women with the help of stones and are as discussed below:

As per the Sanskrit-Hindi Dictionary, the word ‘Sikta’ means ‘sand’ and ‘Siktavati’ means ‘full of sand’. Again the term ‘Ashman’ referred in the Atharva Veda means ‘stone, Chamak Patthar’ and ‘Ashmana’ means ‘with the stone’.

The Sanskrit-English Dictionary gives the meaning of ‘Sikta’ to be sand, gravel and stone and that of ‘Ashman’ is ‘stone, rock, precious stone and any instrument of stone. From these discussions, it is obvious that the mantras of Sukta 17 of the Atharva Veda explain about the stoppage of bleeding with some material made of sand and the mantras of Sukta 35 mention about the treatment of women with some kind of stone.

Prof. Friedrich Max Muller of Germany has given the English translations of these Vedic mantras, from where the presence of magnets in the treatment of ailments can be traced. He is one of the most eminent orientalists, who have translated all the four Vedas and many other Sanskrit and Hindi religious books of India. As per his translation of the Vedic mantras, the meaning of mantras 3 and 4 of Sukta 17 respectively goes like below:
‘Of the hundred arteries, and the thousand veins, those in the middle here have indeed stood still, at the same time the ends have ceased to flow’.

‘A great sandy like has passed around you, stand yet still, pray take your case’.

The Mantras 2 and 3 of Sukta 35 are translated like this:
‘Of these hundred entrails of thine, as well as of the thousands canals, of all these have I closed the openings with a stone’.

‘The appeared part of the womb do I place below, there shall come to thee neither off-spring nor birth, I render thee sterile and devoid of off-spring, a stone do I make into a cover for thee’.

All these mantras of Atharva Veda discussed above are related to the treatment of human diseases. From these mantras, it is clear that the treatment was not possible by means of ordinary sand or simple stones and it was done with some special sand and stones having specific therapeutic properties. The usual metallic magnets are made from iron alloys and the ceramic magnets are manufactured from sand, clay, barium and iron oxide. Therefore, the words mentioned in the Vedas like the ‘Siktavati’ (meaning sandy) and ‘Asitma’ (meaning chakmak patthar) are enough to verify that the magnetic stone and its properties were known during Vedic period also. The magnetic elements were used for therapeutic purposes in India since times immemorial.

What is Arc Magnet?