1 Introduction
Magnetization dynamics, where one investigates the time-dependent motion of the magnetization rather than its equilibrium behavior, are fundamental to the properties of magnetic materials. It is worthwhile remembering that the concept of spin waves was introduced by Bloch  in 1930 in order to calculate the magnetic contribution to the specific heat in macroscopic samples. Much more recently, thermal measurements in multilayers and nanoparticles have been connected to the spin waves that are allowed in confined structures.

In addition, magnetization dynamics also determine the interaction of magnetic materials with electromagnetic radiation. In simple cases, the magnetization dynamics (basically the precessional motion of the magnetization) can be accounted for by a frequency-dependent permeability tensor. An incident electromagnetic wave then interacts with the magnetic system through the permeability, and can have its wavelength, phase, transmission, reflection, and absorption all influenced by the properties of the magnetic material or by an external magnetic field that acts on the material. 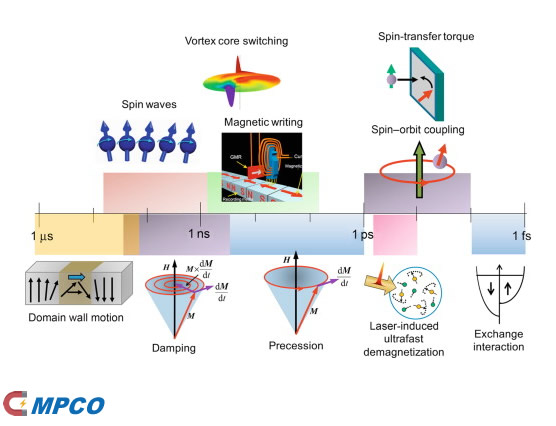 Finally, magnetization dynamics are also fundamental for understanding and measuring phase transitions. In particular, the behavior of low-frequency spin waves can be used to indicate phase transitions because they are often associated with a soft mode where the frequency is driven to zero as a function of applied field or other parameter. A detailed understanding of magnetization reversal, vital to the magnetic recording industry, also depends on the magnetization dynamics.

Dynamical measurements provide a wealth of information about magnetic materials. They are capable of determining the magnetic parameters (magnetization, bulk and surface anisotropies, exchange constants, dipole fields) of individual films and can also determine the strength of the exchange coupling (antiferromagnetic and ferromagnetic!) between coupled films. As pointed out above, spin-wave frequencies can also be sensitive tools to measure the existence of phase transitions.

Dynamical measurements provide one additional parameter, the width of the absorption line, that characterizes the damping in the system and measures how it can be influenced by composition, currents, spatial variations, etc. For example, ultrathin magnetic structures or magnetic nanoparticles are not ideal systems and have many imperfections, such as edges, atomic steps, and dislocations. As a consequence, different local environments result in different effective fields acting on the magnetic moments from one atomic position to another. This means that the material is not magnetically homogeneous. In a ferromagnetic resonance (FMR) experiment, this would ultimately result in a change in the linewidth of the microwave absorption signal, and only FMR is capable of detecting such changes. Narrower linewidths, for example, can indicate an increased magnetic quality for an individual ferromagnetic film. Similarly, linewidth is an important parameter for measuring the changes in damping introduced by spin (polarized) currents that also carry angular momentum.

As pointed out earlier, the magnetization dynamics play an important role in the electromagnetic properties of magnetic materials. This has a fundamental application in signal processing devices such as phase shifters, band-pass filters, band-stop filters, isolators, and circulators. The operational frequency range depends on the internal and external fields in the magnetic material. Typical frequencies range from a few megahertz to a few terahertz, depending on the material or structure.

In recent decades, a new field of electronics that utilizes the electron’s spin degree of freedom, known as spintronics, has received much attention in both fundamental physics research and industrial applications. Spintronics requires the development of magnetic thin-film structures having a wide range of magnetic properties. The bulk, interface, and exchange biased magnetic anisotropies , the exchange stiffness , and interlayer exchange coupling are important for high-density perpendicular magnetic recording , magnetic tunneling junction (MTJ) sensors , and spin-transfer torque (STT) devices . In particular, ultrathin film structures allow one to create a controllable perpendicular anisotropy having the magnetic moment oriented perpendicular to the film surface with a variable magnetic energy. Equally important are dynamic properties: the Landé factor g and magnetic damping. STT devices utilize spin (polarized) currents to switch the magnetization of a ferromagnetic layer in a spin-valve structure. The critical current at which the free layer in an STT device will switch direction is dependent upon the Gilbert damping parameter . Also of importance for future spintronics devices is determining the spin-diffusion length in a variety of materials. This can be done by examining additional damping in ferromagnet/normal metal and ferromagnet/normal metal/ferromagnet structures.

FMR is a well-understood experimental technique that has proven to be an invaluable tool to probe the static and dynamic magnetic properties of ultrathin films and multilayer nanostructures. In order to determine the magnetic parameters, one needs to carry out FMR measurements at a wide range of frequencies. For this reason, it is of great advantage to have a broadband system where measurements can be made at many frequencies without the need to remount samples in different waveguides or cavities.

In this chapter, we concentrate on experimental techniques and results for the measurement of the dynamical motion of the magnetization. We discuss a variety of instruments and techniques that involve measurements in the frequency domain or directly in the time domain. The chapter is organized as follows. In Sections 2 and 3, we give some review material which is helpful to understand the broader picture of magnetization dynamics, primarily in ferromagnets. Section 2 collects some analytic formulas that are commonly used in analyzing experimental data and provides a general background on several types of excitations that may be seen. Section 3 discusses the kinds of initial measurements that one might use to characterize an unknown magnetic sample. Section 4 examines FMR in more detail, introducing magnetic damping and discussing both field-swept and frequency-swept FMR. Finally, Section 5 provides a review of a second common technique for measuring magnetization dynamics—Brillouin light scattering (BLS). Although the main emphasis is on experimental methods, some analytic developments are also included. Details on the analytic techniques are given in other references and in this handbook.

Magnetization dynamics driven by electric/spin current in submicron-scale ferromagnets has been a subject of active study for more than a decade in the field of spintronics . It includes magnetization reversal in multilayer systems, displacive and resonant motions of domain walls in thin wires, and those of magnetic vortices realized in disks. These phenomena are understood as caused by spin torques, the effect that conduction electrons exert on the magnetization through the microscopic s-d exchange interaction.

Recent activity on this subject was triggered by the introduction of the concept of “spin-transfer effect” due to Slonczewski  and Berger. On the other hand, it should be remembered that the idea of driving domain walls by electric current was proposed long ago by Berger. He recognized that the s-d exchange interaction should be the main origin of the driving in thin samples, and proposed the driving mechanisms that are called s-d exchange force (momentum-transfer effect) and s-d exchange torque (spin-transfer effect) . Experimental demonstration was also made by him and collaborators using semimacroscopic samples .

The continuous progress during this decade of course rests on the experimental achievements. The development of fabrication and observation techniques has enabled us to study submicron-scale magnets having simple domain structure, which are suitable for scientific studies under well-controlled conditions, notwithstanding for technological applications. On a theoretical side, modern techniques and viewpoints in solid-state or condensed-matter physics started to be applied, which will hopefully develop further microscopic understanding.

In this chapter, we review some basic aspects of the theory of current-driven magnetization dynamics. We are concerned with magnetization dynamics which are smoothly varying in space and time compared with the microscopic electronic scales. Magnetization is thus treated as a continuous function, , of space and time, and the dynamics is described by the Landau-Lifshitz-Gilbert (LLG) equation. Most prototypical phenomenon is the domain-wall motion. In spite of tremendous amount of works on multilayer (pillar) systems , they are outside the scope of this chapter simply because of our lack of ability.