Magnetic sensors indirectly measure properties such as direction, position, rotation, angle and current by detecting the magnetic field and its changes. Compared to other direct methods, such as optical or mechanical sensor, most magnetic sensors require some signal processing to get the property of interest. They provide reliable data without physical contact even in adverse conditions such as dirt, vibration, moisture, hazardous gas and oil, etc.

Automotive crash safety systems use sensors based on a holding mechanism that can be closed or open using electrical current. Hall effect sensors vary the output voltage in response to the changes in magnetic field. Reed switches have two overlapping ferromagnetic blades (reeds) hermetically sealed in a glass tube. When a magnetic field comes to the vicinity of a reed switch, the reeds are magnetized and attract each other, therefore close an electric circuit. 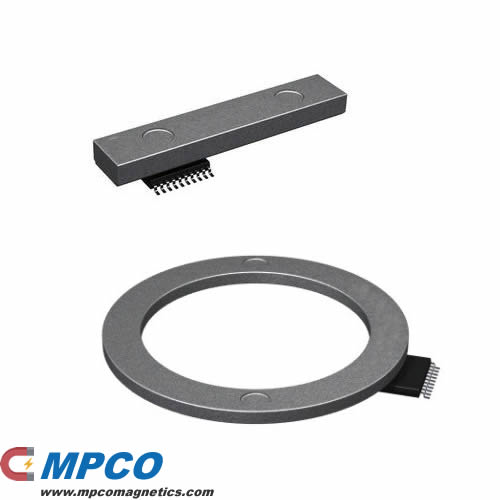 Sensor magnets can be simple as a bar or ring magnet for reed sensors, but can also be intricate and precise as those used in high definition measurements. Such examples are high resolution magnetic encoder magnets.austriamicrosystems makes high performance absolute and incremental linear magnetic encoder ICs, ranging from 8- to 12-bit resolution. One of the encoders require multipole strip or ring magnets, with 1mm±0.024mm pole width. We are proud to be a partner and magnet supplier for a wide range of austriamicrosystem sensor products.

With the rapid development of GMR in the past decade, a new family of magnetic sensors has emerged – magnetoresistive sensors. Similar to Hall effect sensors, the major difference is that MR sensors detect current change instead of voltage. Permanent magnets can also be used in MEM sensor and CMOS magnetic sensor arrays to supply the magnetic field.