The working principle of bladeless fan exists the fundamental difference from conventional fan. The basic structure of bladeless fan generally consists of base and annular nozzle. Annular nozzle is placed on the base and its inner channel is connecting with the base. The base of bladeless fan is mainly served to hold the air flow generator which composed of the motor and impeller. The air intake of the fan is also positioned on the base. The nozzle includes internal channel and ejector which employed to receive and launch air flow, respectively. In reality, the working principle of bladeless fan is based on Bernoulli’s law and Reynold’s law in fluid mechanics. The air first formed the initial air flow through the motor in the base and changed flow direction by curved air duct, thus combined Reynold’s number to obtain the speed of 35 kilometers per hour. Therefore, air flow comes out from nozzle and amplified up to 15 times via Coanda Effect.

Both air conditioning and conventional fan offer high comfort in the hot summer season. The power consumption of air conditioning is fairly high and barely airy. Then conventional fan is not only easy to dirt, but also has large potential risk. Bladeless fan has received much attention since its inception due to the novel appearance. Bladeless fans eject air along a circular path and generate recurring air flow. Its wind sense is much steadier and comfortable compared to the conventional fan’s. Bladeless fan does not have blades and there is no need to clean the dust which caused by electrostatic attraction. In the meanwhile, the safety has been also enhanced. Bladeless fan motor magnet is utilized by the brushless direct current (BLDC) motor of the bladeless fan. 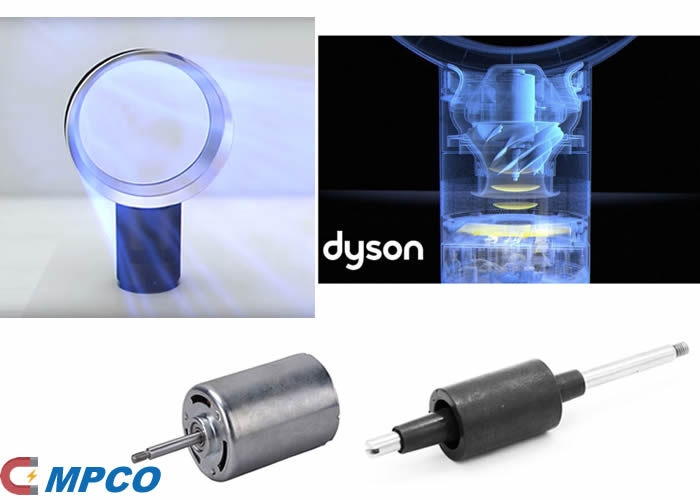 How do bladeless fans work?

When you think of a fan you probably think of two or more blades attached to a central spinning hub, producing a torrent of air. These blades can slice off a wayward finger, though, and fitting a protective cage to the fan blocks some of the airflow.

The Air Multiplier works differently. Using a combination of clever physics and aerodynamics it “multiplies” the air it sucks in, so uses less energy and generates less noise in the process.

It all starts with air entering through slits at the fan’s base. A small brushless electric motor runs a tiny fan with asymmetrically aligned blades which pushes air through a set of stationary blades that smooth the airflow.

The air is directed up into the hoop-like tube at the top of the device where it’s forced out of a circular narrow slit running around the hoop.

At the base of the hoop, the passage is wide. But it narrows near the top of the hoop, squeezing the air and accelerating it, just as water sprays faster out of a hose if you place your thumb over the end.

This is the first point at which the air is multiplied.

The inside of the hoop-like tube is curved like the top of an aircraft’s wing too, so as air is forced out through the slit it clings to the curved surface.

This means surrounding air is sucked through the hoop too, thanks to a principle of fluid dynamics known as inducement. Put simply, the airflow induces the air behind the tube to be pulled along too.

At this point, the fan has still not finished multiplying its initial air intake. By taking advantage of another principle of fluid dynamics known as entrainment, air surrounding the edge of the tube is drawn through in the same direction as the electrically propelled air.

Altogether, this allows the Air Multiplier to multiply its initial air intake by about 15 times. Dyson says that the fan can draw in about 20 litres of air, about three times the total volume of our lungs, every second. This means it can pump out about 300 litres by accelerating just 20 litres – a massively efficient conversion.