A Magnet Array for fully contactless xy-positioning systems. The magnetically levitated planar actuators consist of a single carrier with permanent magnets that is levitated above an array of coils and can move fast and accurately over long distances in the xy-plane. Because the magnets are moving, there are no cables or cooling hoses connected to the moving part. Nevertheless, data and energy can still be transferred, using contactless links.

Halbach Array with Hexapole Magnets
A Halbach Array is a magnetic array that produces a high magnetic field utilizing permanent magnets, arranged with a spatially rotating magnetic field vector which has the effect of focusing and augmenting the magnetic field on one side, while cancelling it out on the other. Halbach Arrays are able to achieve very high and uniform flux densities without necessitating any power input or cooling, which an electromagnet would require. 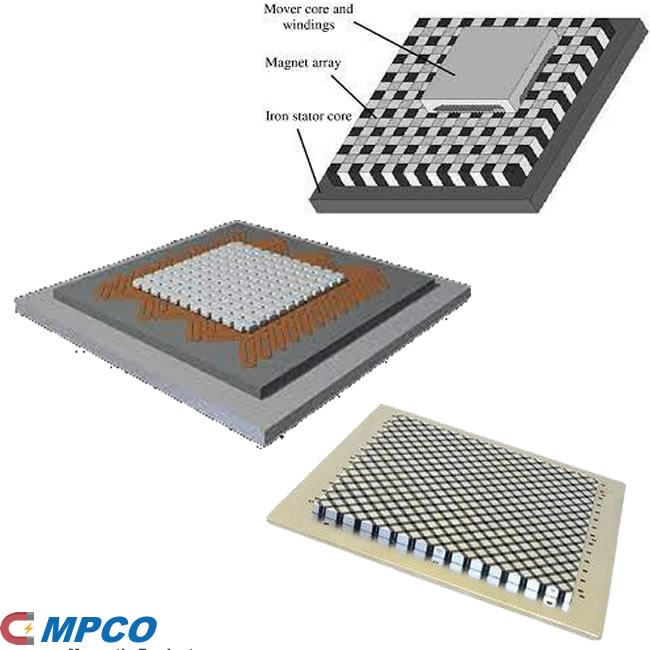 Halbach Array with Hexapole Magnets
A Halbach cylinder is a circular Halbach array consisting of several trapezoidal or arc-shaped magnet segments with magnetic orientation vectors that rotate in order to focus the field. They are routinely built in quadrupole, hexapole, sextupole, octupole and other magnet configurations. Generally, the larger the number of discrete magnets with a corresponding number of magnetic vector angles, the more uniform the field across the inside diameter of the Halbach assembly.

Linear (Planar) Halbach Array
Linear Halbach arrays consist of discrete, rectangular permanent magnets mounted on a ferromagnetic backplate with varying magnetic orientations that serve to focus the field on one side of the array, producing a uniform and powerful semi-sinusoidal magnetic field. Linear (planar) arrays can also be used in a yoke configuration to produce a very powerful sinusoidal field in the gap.

Linear Halbach Array Assembly for Maglev Train
Specialty Project: Under Contract from General Atomics, Integrated Magnetics is proud to have built the linear Halbach components for a Maglev demonstration train, based on the Inductrack design which was developed by Lawrence Livermore National Laboratory under the guidance of the late Dr. Richard Post. We have also build linear Halbach array assemblies for a number of high-speed Hyperloop projects.

Specialty Project: On a production basis, we custom engineered and built a Halbach-type, high-field gradient magnetic assembly, designed to produce a strong and focused field for a robotic catheter navigation application. This complex magnet consisted of several hundred discrete magnets with multiple magnetic orientations. The final assembly weighed over 800 lbs.