Longonjo neodymium-praseodymium project is an open-pit mine producing neodymium and praseodymium located in the African nation of Angola. Pensana Metals fully owns the project and is developing it at a capital cost of £168.4m ($131m).

Pre-feasibility study (PFS) of the Longonjo project was completed in November 2019. The project is expected to produce 56,000t of NdPr concentrate a year during its anticipated mine life of approximately nine years.

Pensana proposes to start construction on the project in 2020 and operations in 2021. 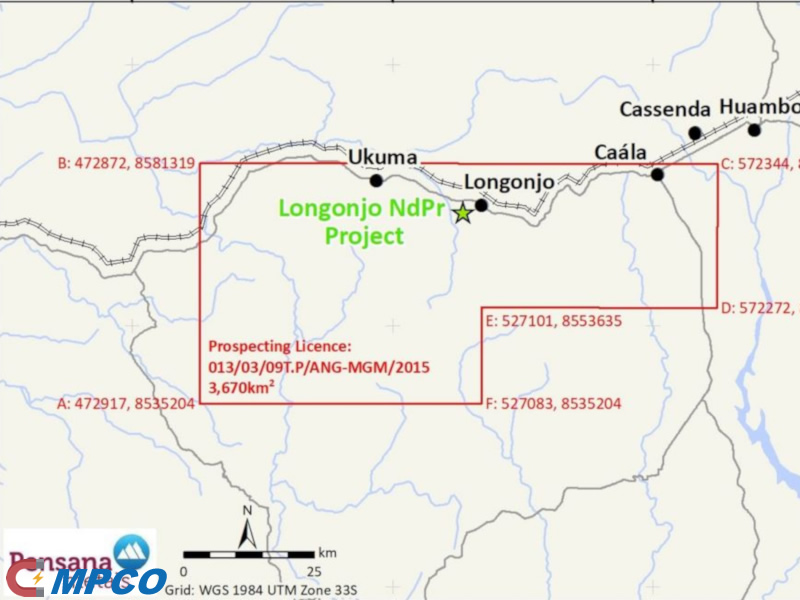 PROJECT GALLERY
The mineralisation at the project is present within the Longonjo Carbonatite, which is a sub-circular vertical diatreme with a diameter of 2.2km. The mineralisation of the rare earth metals is distributed in the near-surface weathered zone and forms a layer of soft iron-rich material.

The mineralisation is also contained in fresh rock below the weathered zone horizon, while the thickness of the weathered zone and accompanying veneer of soil and gravel is between 20m and 30m. Monazite and bastnaesite are the primary rare earth minerals present in the outer areas in weathered zone.

Ore reserves at Longonjo NdPr project
The indicated and inferred resources present in the Longonjo neodymium-praseodymium project are 226 million tonnes (Mt) graded at 0.33% NdPr. The mine is estimated to contain 3.32Mt of REO including 735,000t of NdPr.

Mining and ore processing
The mining method to be utilised at the Longonjo NdPr project is the open-pit method with hydraulic excavators to be used for excavation.

The plant feed will be sent to the run-of-the-mine (ROM) pad before being dumped on stockpiles. The front-end loader feeds the primary breaker of the plant.

The ore processing will involve comminution, initial or pre-flotation, and flotation to produce a rare earth concentrate. The rare earth minerals will be extracted from host gangue minerals through crushing and grinding, as part of comminution.

It will be followed by dewatering of product, as part of which the rare earth concentrate will be thickened and filtered to a moisture content ranging from 12% to 15%. Initial flotation will remove interfering gangue minerals, while rare earth minerals will be recovered and concentrated in the final flotation stage.

The final rare earth concentrate will be packaged into bulk bags within sea containers and transported to the rail siding near Longonjo town. The bags will be loaded onto rail cars and taken to the Atlantic port of Lobito for export to customers, through the Benguela railway.

Infrastructure facilities
The Longonjo NdPr project is located in close proximity to modern rail and road links, which directly lead to Atlantic port of Lobito.

Power required by the project will be sourced from the National grid powered by hydro schemes, through a substation at Caala. An existing diesel and battery powered generator will supply power to the project during construction.

Water supply for the project will be made from the reclaimed water and rainfall from the tailings storage facility (TSF), while the make-up water will be drawn from the nearby bore fields.

Other facilities at the project will include laboratory, offices, ablution, and accommodation for workers.

Other parties involved in the PFS preparation include Bureau Veritas Minerals, Conrad Partners, and Nagrom Laboratories.