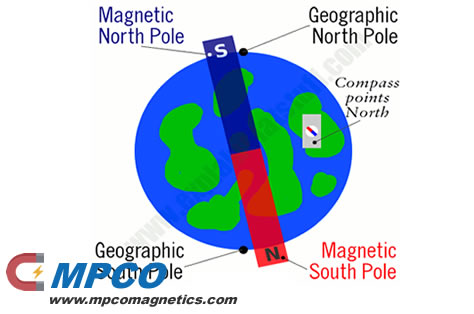 How do compasses work

Magnetism is one of the first bits of science we learn in school and just about the first thing we discover is that “like poles repel, unlike poles attract.” In other words, if you hold two bar magnets so their north poles are almost touching, they’ll push away from one another; if you turn one of the magnets around so one magnet’s north pole is near the other magnet’s south pole, the magnets will pull toward one another.

That’s all there is to a compass: the red pointer in a compass (or the magnetized needle on your home-made compass) is a magnet and it’s being attracted by Earth’s own magnetism (sometimes called the geomagnetic field—”geo” simply means Earth). As English scientist William Gilbert explained about 400 years ago, Earth behaves like a giant bar magnet with one pole up in the Arctic (near the north pole) and another pole down in Antarctica (near the south pole). Now if the needle in your compass is pointing north, that means it’s being attracted (pulled toward) something near Earth’s north pole. Since unlike poles attract, the thing your compass is being attracted to must be a magnetic south pole. In other words, the thing we call Earth’s magnetic north pole is actually the south pole of the magnet inside Earth. That’s quite a confusing idea, but it’ll make sense if you always remember that unlike poles attract.

Earth’s magnetic field is actually quite weak compared to the “macho” forces like gravity and friction that really dominate our lives. For a compass to be able to show up the relatively tiny effects of Earth’s magnetism, we have to minimize the effects of these other forces. That’s why compass needles are lightweight (so gravity has less effect on them) and mounted on frictionless bearings (so there’s less frictional resistance for the magnetic force to overcome).