They say “if it ain’t broke, don’t fix it.” And from roughly 1853 untill now, the way elevators rise and descend has changed minimally. In 2003 thyssenkrupp, an industrial business group, developed a twin elevator that changed the amount of traditional cabins used, but not the way they travel. Stacked on top of each other, the elevators acted as two separate cabins that would enhance travel times and energy efficiency. Now, using the power of magnetism, the company is back and making an elevator that will change everything you’ve ever known and seen in elevators. 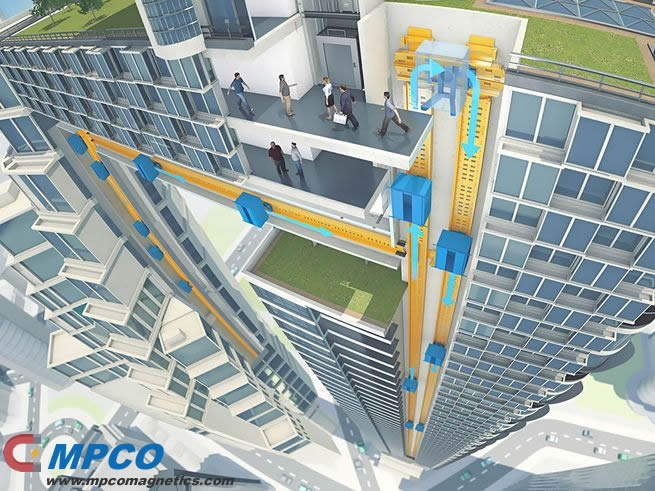 Headquartered in Germany, thyssenkrupp is developing an elevator system called MULTI. The plans for the design will transform the way we think about elevators from only moving up and down to moving left and right as well.
It’s designed to help riders eliminate long wait times and the need to walk across buildings because of elevator locations. According to a 2010 Columbia University study, New York City office workers spent 16.6 years waiting for elevators, while they spent less than a third of that time actually riding in them. As cities across the world get larger and larger, this problem will become more prevalent.

The MULTI will travel throughout buildings using the same technology as the Transrapid train. The train uses electromagnetic suspension to travel and actually appears levitated. To achieve this, the magnetic field produced by electromagnets strength is altered so that it can go from left to right. In the case of MULTI, up and down as well.

To maximize speed of the elevator the cabin will travel on a continuous loop, like a subway or rollercoaster. As of now though, the project is still in testing, and you probably won’t see these for a few more years. To test them thyssenkrupp is building a test tower in Germany that is expected to be finished by the end of 2016.

Magnets help us in many ways, but who thought they would one day help make our elevators move horizontally? Let us know in the comments section any other ways you think electromagnetic suspension could be used in our world today.