Compasses are brilliantly useful but they can sometimes lead us astray, because of two quite different problems called declination (or variation) and deviation. Here’s why. 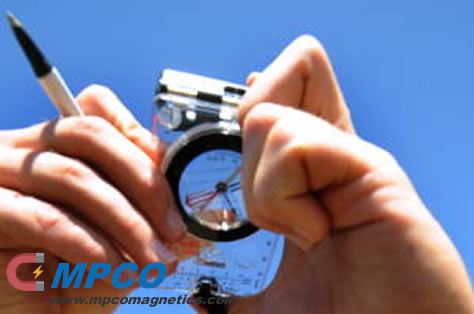 Earth spins about an axis (a kind of invisible rod) running through the north pole (sometimes called the geographic north pole, at the “top” of the planet) and the south pole (or geographic south pole, at the “bottom” of the planet). But Earth’s magnetic field is a bit wonky and doesn’t quite line up with its axis of rotation. So the magnetic north pole (the place your compass points toward) doesn’t precisely coincide with the real north pole (it’s several hundred km/miles) away and the same goes for the magnetic south pole.

In practice, the difference between “true north” and “magnetic north” is small and generally (when you’re out and about with a compass and map) you can treat the north a compass shows you as though it were pointing to the real, geographic north pole. If we’re being more accurate, the difference between “magnetic north” and “true north” is an angle that varies slightly from place to place (and from year to year, because the position of Earth’s magnetic north is constantly changing) and it’s called the declination or variation. When really accurate navigation is important (for example, on ships), you have to take the declination into account and correct for it.

A compass is designed to react to the magnetic field generated by the swirling hot mass of rock thousands of kilometers/miles deep inside Earth, but there are lots of other things going on, much nearer to your compass, that can throw it well and truly out of whack. If you’re inside an iron ship or a car, for example, all that metal can make a big difference. The accuracy of a compass measurement in a certain situation is called the deviation, and it’s the angle between where the compass would point if it were perfectly accurate (magnetic north) and where it actually points. If there’s a magnet nearby, or you’re near a particularly magnetic bit of Earth’s crust, or there are fluctuating electric currents generating magnetic fields, your compass needle is going to be affected and its accuracy is going to be reduced. The most sophisticated compasses have compensating magnets or pieces of iron built into them that you can adjust to cancel out any local magnetic effects.

Declination and deviation don’t matter so much if you’re on foot with a map or in a car; generally, there are other things you can use to help you find your way and it’s hardly catastrophic if you take a wrong turn or two. On a ship, far from land and in bad weather (so you can’t navigate by the sky), it’s a whole different matter. Before technological advances like GPS and radar came along, people’s lives depended on navigating accurately by compass alone. That’s why ship’s compasses (sometimes called mariner’s compasses) were much more sophisticated than the ones people typically used on land. In a modern ship’s compass, the compass card is attached to a float with a number of magnetic needles underneath it and spins freely inside a large glass bowl filled with a mixture of alcohol and water (to minimize friction and absorb vibrations from the moving ship). The whole thing is mounted on gimbals (pivots) in a stand called a binnacle so it stays horizontal even when the ship is pitching (moving up and down) and rolling (rocking from side to side) in the waves.

Other kinds of compasses

If magnetic compasses can be tricky to use in ships, imagine how much worse they are in fast-moving aircraft. That’s why airplanes (plus large ships and some land vehicles) rely on gyrocompasses. Unlike a magnetic compass, which points the same way because of magnetic attraction, a gyrocompass uses a gyroscope—a fast-spinning wheel, mounted on gimbals, that keeps rotating in the same direction whichever way you turn it. Gyrocompasses are better able to cope with the more “dynamic environment” onboard ships and planes and another advantage is that they can be set to indicate true north (the north pole) rather than magnetic north.

The gyrocompass was successfully developed in the early 20th century by American engineer Elmer Sperry (1860–1930), patented in 1908, and first demonstrated on a ship in 1911. However, Sperry’s gyrocompass was actually based on an earlier (1906) invention by German scientist Hermann Anschütz-Kaempfe (1872–1931), who successfully sued Sperry for patent infringement in Germany with the help of Albert Einstein (1879–1955). Later patent infringement cases in the UK and the USA found in favor of Sperry, however, which is why he’s largely credited with the invention today.

Who invented the compass?

No-one knows when or where compasses were invented, but this is what we do know: