The magnet has its affect on blood and hence it influences other body parts also in a good or bad way. Thus, the whole human metabolism is also affected by it.

A magnet not only attracts iron and but also other things containing ‘martial humours’ that are there in the human system. The word ‘martial’ means ‘iron- pertaining to or containing iron and the word ‘humours’ means any fluid or semi-fluid substance in the body. In ancient medicine, the four juices, namely: blood, phlegm, black bile and yellow bile of which the body was thought to be composed, were called humours. Hence, the magnet is very useful in all inflammations, influxes and in ulcerations, in diseases of the bowels and uterus, and in internal as well as diseases.

The effects of magnetic fields on the human body are attributed to several factors. These are:
The microbial movement and protoplasmic flow possible are sometimes obstructed due to their motion in the direction at right angle with the magnetic field.

The magnetic field sometimes acts against the growth of the young tissue like the action against mitose.

The magnetic field influences on the human autonomous nervous system.

The magnetic field is also affected by the magneto hydrodynamic phenomenon and reciprocal difference in the magnetic susceptibility.

According to a popular theory, the affect of magnetism in the molecules containing iron such as haemoglobin and cytochromes is discussed. These theories are proposed because of the well-known paramagnetic properties of iron. The scientists of several countries have discovered that the process of crystallization in solutions is influenced by magnetic fields. After numerous experiments, it is proved that the magnetic field increases the number of centres of crystallization.

The affect of magnetic field on liquids is described by one scientist. As per his experiments, he concluded:
A magnetic field increases the number of crystallization centres in a liquid.

The increase in the amount of crystallization centres is directly proportional to the strength of the magnetic field.

In the case of constant field, the number of crystallization centres increases directly with the time of imposition of the magnetic field.

After a lot of experiments and experiences it is discovered that many physical and chemical properties of body water changes when it is exposed to the influence of weak magnetic field. These changed properties, namely, its temperature, density, electrical conductivity, surface tension and viscosity exist for a long time. The blood is also a fluid hence it is also influenced by magnetic fields and its properties also undergo a change when it is brought in contact with magnets.

The blood consists of many inorganic salts and its important constituents and the properties of blood change under magnetic flux. This changed circulates through the whole body and provides beneficial influence on the entire body and relieves or prevents many ailments, thus affecting human metabolism. 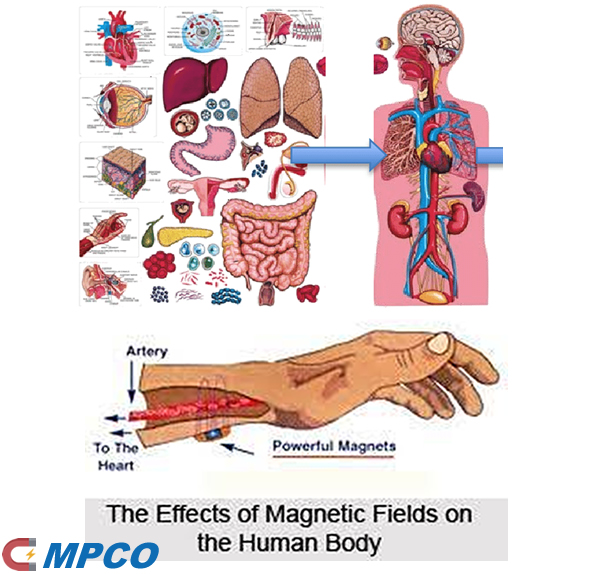 Affect of magnets on Pituitary Gland:
The Pituitary gland in human body is a ductless body located at the base of the brain, which always discharges hormone secretion. It helps in the body growth. The magnets can help the boys and girls to increase their height to some extent up to the age of 14-15 years in normal cases by increasing the secretion from this gland.

The magnets affect the reformation, resuscitation and promotion of the growth of human cells. The magnetic flux generates a comfortable warm feeling in the body. The warmth strengthens the function of cells and cures inflammations and spasms.

The magnetic flux passes through a tissue and then a secondary current is created around the magnetic lines of force in the tissue cells. It then ionises the protoplasm and rejuvenates the tissues by activating the metabolism. Chaps, incised wounds etc can be healed through the treatment with magnets.

Affect of magnets on acceleration of Self-Curative powers:
The magnetic flux is a natural healing power and it revitalizes the self-healing property of the human body. The strong magnetic flux enters deeply into muscles, fatty tissues and bones and thus gives intense relief to the nerves. The use of magnet helps to improve even incurable diseases in a short period and increases self- curative powers.

Heart and Geomagnetic Activity
The link between the heart attacks and the geomagnetic activity is discovered by the scientists of the National Geophysics Research Institute, Hyderabad. The fluctuations in earth’s magnetic field are caused by solar flare and sunspot activity. These scientists also noticed that heart attack cases generally occurred during geomagnetic disturbances showing rapid fluctuations and pulsations. These pulsatory fields react with human heart or brain electrical potential and cause heart attacks or psychiatric disturbances in persons who are not otherwise in perfect shape and condition.

The electrical potential of the body remains normal in bioelectrical state of the body and its organs are disturbed during severe magnetic disturbances in the atmosphere.