7-year-old boy Lei Lei (a pseudonym) accidentally swallowed a nail-sized magnet in the FuYang City of China. The next day, without discomfort, he showed his ability in front of his friends and swallowed a magnet of the same size again. On December 16, Anhui Business Daily Rong Media reporter learned from the Pediatric Surgery of Fuyang Women and Children Hospital that a few days ago, the hospital successfully treated Lei Lei who had paroxysmal abdominal pain.

“When the children were playing at home last week, they accidentally swallowed a small thumb-sized fingernail. The child told the family at the time.” Sun Cheng said, but the family was negligent because the child did not feel uncomfortable. 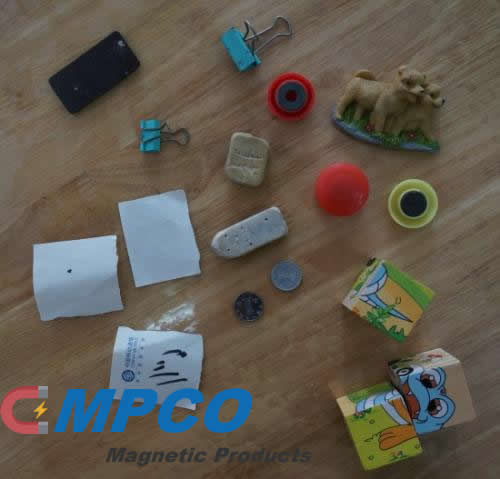 “The next day, the son in front of the little friend, in order to show off his “capabilities”, actually swallowed a similar size of the magnet.” Sun Cheng said that the night, the child had paroxysmal abdominal pain, “learn the child Even swallow two magnets and take the child to the hospital.”

The hospital’s pediatric surgeons said that after Lei Lei was hospitalized, the two magnets could not be discharged by themselves, and the abdominal pain gradually increased. Finally, under the general anesthesia, laparoscopic exploration was performed in the emergency department. Two magnets were found in different intestinal segments of the terminal ileum.

“Because the two magnets attract each other, the intestinal wall is crushed and damaged by the attraction. The color of the intestinal wall of the extruded surface is pale and erosive, and there is inflammatory exudation around.” The attending doctor introduced that fortunately, the two “sucks “The magnets together did not cause necrosis or perforation of the child’s intestines.”

“In order to avoid opening the abdomen and avoid cutting the intestine wall to remove the magnet, we underwent laparoscopic decompression of the terminal ileum and slowly pushed the two magnets to the right colon.” The hospital staff introduced, and then, radiated in the hospital. With the help of the staff, the position of the two magnets was fluoroscopy, and after confirming that both magnets were discharged to the cecum, the endoscope center was again combined, and the two magnets were smoothly taken out under the colonoscope. At present, Lei Lei is in stable condition and is already recovering.

Found that children swallow foreign bodies, do not induce vomiting or use laxatives

Guo Qi, deputy director of the Department of Pediatrics of the Second People’s Hospital of Anhui Province, said that among the children who are currently seeking medical treatment for foreign bodies, the most common foreign objects include coins, buttons, small toys, batteries and so on. “When swallowing foreign bodies, most of the foreign body will be discharged through the digestive tract of the child with the feces. If the foreign body swallowed is special or combined with serious complications, the condition is critical and may even cause death in children.” Guo Qi reminded that when the parents found that the child swallowed After the foreign body, there are two ways to deal with it: one is to prohibit vomiting. “Because vomiting sometimes causes foreign bodies to be inhaled into the trachea and suffocate. As long as there is no suffocation and hypoxia, such as coughing, difficulty breathing, and cyanosis of the lips, don’t be overly nervous.” “The second is to disable the cathartic. Nail, paper clip When a foreign body with a pointed or hooked body encounters a rapid peristalsis of the intestine due to the action of the drug, it may be hooked to the intestinal wall and cause intestinal perforation.” Guo Qi said that foreign matter may appear and co-exist in hours, days or years. Symptoms related to symptoms, if there are symptoms and signs such as cough, refusal to eat, vomiting, salivation, wheezing, bloody saliva or difficulty breathing, parents should be highly suspected of the possibility of swallowing foreign bodies. Under any circumstance, the residence time of foreign bodies or food groups in the esophagus should not exceed 24 hours. Parents should have a sense of timely medical treatment.